Hope for the Future: An Analysis of Overwatch Director’s 2017 DICE Keynote
Andre Adame

A Small Step Towards Change: A Comparative Analysis of Violent and Sexual Representations in Movies between the 1980s and 2000s
Ariana Cano

Plasticozoic/Artifacts of the Anthropocene
Mariah Conner

The Right to Exist: An De-Colonial View of Representations of Marginalized Sexual Identities in the Media
Luis Esparza

Don’t Dream Too Big: An Ideological Criticism of Feminism in Disney’s “Be a Champion” Commercial
Victoria Luckner

YouTube and Tourism: A Comparative Study of Vlogs on Slovenian Tourism
Faith Nevarez

How Often Are College Students to Self-Disclose About Sexuality?
Francisco Rodriguez

The Art of Death
Heather Roessler

Complexities of Being Female: How Sexuality and Shame Silences Female Voices
Erendira Torres

Who Say’s Teachers Can’t Be Funny? An Analysis of the Success of Humor in the Classroom
Jessica Vierra

Creating a College-Going partnership with Parents and Families
Mina Blazy

Closing the Achievement Gap: What Else Can We Do?
Alliance Gueming

The Effect of Mobile Application for TOEFL Pronunciation and Speaking Learners and two other research
Qi Guo, Lu Jia, and Tong Feng

The development of chemical inhibitors against the metalloprotease falcylisin
Jeffrey Chance

A mass movement in Snow Creek Canyon, above the town of Forest Falls, occurred on February 17, 2017. The mass movement rapidly moved downslope and transported large boulders and trees approximately 610 m (2000 ft) down the narrow canyon. The purpose of this study was to characterize the mass movement in terms of materials in motion, moisture content, nature of movement, and rate of movement. The study analyzed historic aerial photographs, ground based imagery and videos, and photos obtained by UAV to understand the mode and velocity of movement. Sediment and rock samples from the source area were analyzed to determine rock type, mineral content, physical weathering and observe signs of historical tectonic activity. Meteorological and seismic databases were accessed to obtain timing and volume of precipitation as well as potential seismic activity before the movement occurred. Previous work that has been conducted within the study area was examined to compare and contrast the findings to the Snow Creek Canyon event. Data collected during the study confirmed the Snow Creek Canyon mass movement was a translational rockfalldebris-slide. The fractured-nature and weathering of the insitu material and the sudden and violent movement contribute to rapid breakdown into sediment that later appears to be remobilized down-canyon into debris flows
Kerri O’Keefe

The Relationship between Early Maladaptive Schemas and Depression: The Mediational Role of Psychological Inflexibility
Javeen Beard

Information and Communication Technologies (ICT) and Violent Extremism in the Middle East: A Complex Systems Analysis of Loyalty and Intransigence
Natascha Bolden

The Impact of Optimism on Relationship Commitment
Kaela Bonafede

The Quest for Entity Resolution
Brittney Boyd and Citlalik Figueroa

Stressed Out Before Kindergarten
Jasmine Clark

Understandings of Race, Discrimination and Inequality in the Obama Era
Joanna Romero

Assessment of Acrophobia: A Comparison of Virtual Reality and In Vivo Environments
Khalil San Martin Rodriguez

The Impact of Attachment on Instant Friendship Connections
Andrea Vargas

The Effects of Anxiety on Attention and Cognitive Performance
Stephen Ware

From Female Moneylenders to Church Shares: Socioeconomics in the Coptic Village of Jeme
Marmar Zakher

Localization of Accumulation of Glyphosate herbicide within the body of Drosophila melanogaster, a non-target animal
Karina Herrera

With Honor: A Comparison of WWII and Vietnam veterans
Natassja Martin

Study of first-generation immigrant students who arrived to the U.S. during childhood and their well-being and academic experiences as adult
Erika Banuelos Alvarado

Foster Youth and their Transition into Higher Education
Haidy Bonilla

Queen of Peace: Decolonizing the art, iconography and legend behind the Virgin Mary of El Salvador
Jasmine Colorado

The Great Oppressor: A Queer Analysis of Fear and of Silence in Carmen Maria Machado’s “The Husband Stitch” and Margaret Atwood’s “Bluebeard’s Egg”
Jeanette Jetton-Rangel

La Loteria of Narcocorridos: The Thin Line Between Celebrity and Tragedy
Andreina Lopez

Self-Radicalization in the Public Sphere: A Concept Explication of Red-Pilling
Scott Romo

Super Siblings Abstract for Meeting Of the Minds 2019
Sophia Josemoan

Disaster Doesn't Plan Ahead but You Can
Prince Ogidikpe

A Day in the Life
Celene Gonzalez

The Neural Correlates of the Dunning-Kruger Effect
Alana Muller

The Right to Exist: A De-Colonial Analysis of Media Representations of Sexual Minorities
Luis Esparza

The Death of the Self and Agency
Heather Norwood

Changing Land Use and the Impact of U.S. Agricultural Aid in the Republic of the Marshall Islands, 1945 to the Present: A Research Agenda
Debra Claypool

“I am Not a Failure”: The Educational Experiences of Latina Continuation High School Students
Johanna Ortez

Effective Professional Development for Educators and School Administrators in Higher Education and Practicum: What role can ACSA play?
Catherine Tamayo

Relationship among Physiological, Perceptual, and Biomechanical Variables during Exercise on a Non-Motorized Treadmill In DII Cross-Country Athletes
Sean Christopher Bonilla

Analysis and Genesis of Eruptive Muds from the Southern Shore of the Salton Sea, CA
Luis Gomez

The Potential Role of Osteoderms during Thermoregulation in the American alligator
Sarah Handy, Maria Ceja, and Jonathan Arnette

We've Always Been Like Kind of Kicked to the Curb": A Qualitative Analysis on Experiences of Discrimination and its Effects on Self-Esteem Among College Students
Cindy Mahoney

"You do it without their knowledge" Is non-consensual condom removal the new public health emergency?
Marwa Mohamed

Determining accurate locations of the Mill Creek and Mission Creek fault strands near Forest Falls, California through the use of remote sensing mapping
Seth Clemen Saludez

The origin of biogenic growths on gold recovered from the SS Central America shipwreck: implications for geoarchaeology
Bryan Seymour

From Lovers to Liars: The Positive and Negative Features of Catfish Relationships
Vanessa Chitry

The Impact of Employment Status on Depression: An Examination of Racial Differences
Kristof Csaba

What Are We Seeing? Change, Evolution, or What.
Citlalik Figueroa and Britney Boyd

The Role of Sexual Self-Schema and Psychological Distress in the Relationship between Sexual Victimization on Sexual Functioning and Satisfaction.
Alexandra Medina

The Impact of Racism on Mental and Physical Health
Linda Phan

The Effects of Maternal Depression on Sibling Conflict
Carissa Rieger

La Loteria of Narcocorridos: The Thin Line Between Celebrity and Tragedy
Andreina Lopez

I’m sexy and I know it: The effect of mate poaching on self-perceived mate value
Daniel Sprague

Will your parents relationship affect the quality of your romantic relationships?
Evelyn Ulloa

Conceptualization of Mexican-American and Euro-American Relationships: To Be or Not to Be
Jessica Vierra

RESILIENCE AND POST-TRAUMATIC GROWTH IN PARENTS OF CHILDREN WITH SPECIAL NEEDS
Elizabeth A. Sidener

Influence of Gut Microbiome on Obesity in Western-Style Dietary Practices Versus Other Diets: A Systematic Review
Keely A. Niemeyer, Doris I. Buezo, Loren Landeros, and Karina Corral 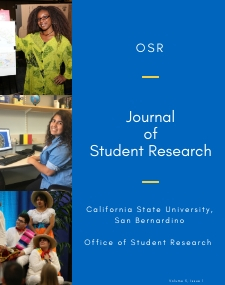