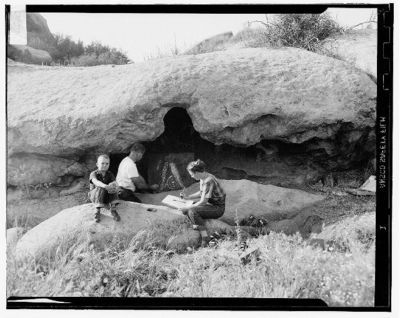 The site (VEN-4) above Chatsworth Reservoir was on a private ranch owned by Mr. Silvernale. There were two cave homes at the site and pictographs in varied shapes and vivid color. The West Coast’s first atomic power plant was planned for some of the Burro Flats area in 1954 (Jackson, 1954).

published in ASA Bulletin (Blast from the past no. 9, 1990). The original negative shows pictographs within the cave and LaMonk and Cowper painting and sketching outside the cave.