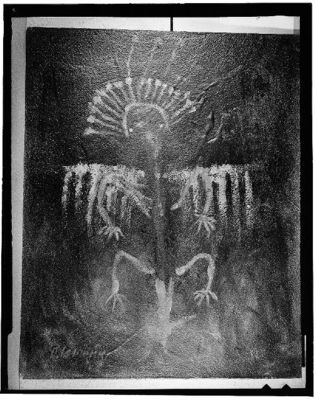 Photographs of LaMonk’s reproductions. Neither of the original reproductions is in the ASA LaMonk collection.

ASA001-209 – 211 photograph of LaMonk’s reproduction of the most dominant pictograph figure in the ceremonial cave. Hedges (1985) states that the figure illustrates the flight metaphor. A similar figure appears in ASA LaMonk No. 11 prepared in 1953. VanTilburg (1983, p. 44-45) recorded a similar figure from a “rock shelter in the Simi Hills.”